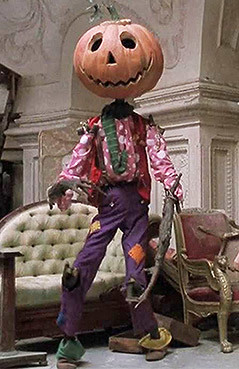 Several Halloween denizens are pumpkin-headed monsters with faces carved into them. This is most commonly used for the Headless Horseman, but a Jack-o'-Lantern man is very common.

There are two types of Pumpkin Person. One type (the mundane one) simply wears a mask of a Jack-o'-Lantern, while the other's head actually is a pumpkin. A lot of the time, the person's name actually is Jack.

While pumpkin persons found ground in Asian works in the 1980s and early 1990s, their heads tended to be green instead of orange. This is due to the Japanese pumpkin, known there and in the West as the kobacha, being the default pumpkin over there. In Japan, kabocha refers to both the green and the orange varieties, so that's where the mix-up came from. Nowadays, the Western pumpkin person is fully adopted and the Japanese kabocha person doesn't show up anymore.

Kabocha persons are easily confused with watermelon persons, which are an older youkai that gained new popularity in the 1980s. Before that time, watermelon persons had normal faces, but under influence of Western media, the carved face was adopted. The horror angle from pumpkin persons was easily integrated with Japan's pre-existing notions of horror: Summer is the season of horror and watermelons are the summer treat, not to mention the symbolism of a head as a watermelon when it's smashed into pieces. Nowadays, watermelon persons are rarer than pumpkin persons, but they do show up every so often and have made their way to the West to boot.

This trope has relation to Scary Scarecrows, who often have gourd heads, and Stingy Jack, who, of course, started the Jack-o'-Lantern. Often a Plant Person when the whole body (and likely its origin) is floral. Sub-Trope of Non-Human Head. Compare/contrast Skull for a Head.

This trope does not refer to Billy Corgan, James Iha, D'arcy Wretzky, or Jimmy Chamberlin.

Examples of pumpkin and kabocha persons:

The Devil placed Stingy Jack's soul into a pumpkin, manifesting a humanoid Scary Scarecrow form with a jack o'lantern for a head.

The Devil placed Stingy Jack's soul into a pumpkin, manifesting a humanoid Scary Scarecrow form with a jack o'lantern for a head.