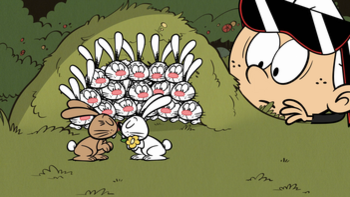 In Real Life rabbits come in a variety of colors. Most of these colors are a result of breeding for appearance in domestic breeds of rabbit (though as with any animal, breeding exclusively for color can sometimes lead to health problems). Wild rabbits and hares are almost invariably gray or brown in order to aid in camouflage, though some will have white winter coats to blend in with the snow.
Advertisement:

In fiction however, rabbits are frequently depicted as pure white, regardless of breed or season.

This may be due to the fact that bunnies and the color white both have associations with innocence and gentleness. It may also be that any animal which is pure white tends to be visually striking and easy to watch. Or it could just be that a white bunny is so darn cute.

It is also likely due in part to The Coconut Effect. White is a color favored in pet rabbits, so if a person's first exposure to rabbits is through someone's pet it is likely to make them expect to see more of the same.

Eye color also plays into this trope. Most colors of rabbits simply have brown eyes. White rabbits however can also have blue or what rabbit breeders call "ruby" eyes. The ruby eyes can be portrayed as sinister red, or as a cute and feminine pink. The sinister red-eyed version would be a tie-in to the idea that Albinos Are Freaks, and the cute version is an aversion or subversion of that idea.

The bunny can be either all or mostly white or light grey. Aside from that, white rabbits in Japanese media may also have a black tip on their ears- this is largely due to the common Japanese snow-hare having such a feature and thus is much more relateable in Japan.

The white or light grey bunny is likely to be played to one of two extremes. It may personify gentleness and innocence, in which case it is likely to be a pet or friend to a pure, innocent character. Or it may play a deliberate subversion of that perception by being evil or vicious, in which case characters will probably approach it unsuspectingly only to get a nasty surprise.

A Sub-Trope of Typical Cartoon Animal Colors. See also White Stallion, White Wolves Are Special, and Great White Feline for other white animals portrayed as good, albeit in a noble way than an innocent one. Not to be confused with Follow the White Rabbit.