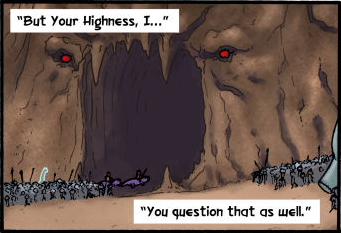 Kidnapper: We'll be fine. Trolls run from fire.
Rincewind: Yes, but... this one can't, you see.
Kidnapper: And why's that?
Rincewind: Well, because... you've lit it on his tongue.
— The Light Fantastic

There's a good reason the entrance to any underground cavern is called a "mouth".

Consider that the mouth is a breeding ground for bacterianote (both good and bad); it's dark, and damp, too, and has a lot of sharp objects lining its roof and floor.

Now consider a typical cave: Dark, possibly damp, a breeding ground for all sorts of unsavory creatures, with stalagmites on the floor and sharp (and occasionally falling) stalactites lining the ceiling...

So is it any wonder that sometimes authors can't resist making a Visual Pun out of the "mouth" to a cave?

See also Beware the Skull Base, which often features this trope with the mouth being the dead jaws of a giant creature, and Poorly Lit Pareidolia. Sometimes this goes beyond the visual metaphor and actually becomes a plot-relevant — perhaps That's No Cave.