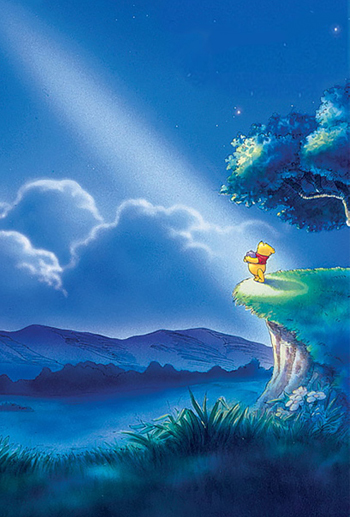 "I used to believe in forever, but forever's too good to be true."
"Once, upon the last day of a golden summer, there was a boy… and a bear. The boy, who we shall meet in a moment, was called Christopher Robin. The bear was called Winnie-the-Pooh. And together, they had many grand adventures in a remarkable place called the Hundred Acre Wood. But the grandest and most extraordinary of all those adventures was still to begin…"
— Opening Narration
Advertisement:

Christopher Robin spends the "last day of a golden summer" with his best friend, Winnie the Pooh, all the while keeping a secret from him. He leaves Pooh with some cryptic advice: "You're braver than you believe, stronger than you seem, and smarter than you think… Even when we're apart, I'll always be with you."

When Pooh wakes the next day (on the first day of autumn) he discovers a note from Christopher Robin attached to a pot of honey. Pooh collects the gang and they all go to Owl to decipher the message, which had been splattered with honey and rendered illegible. Owl informs them that Christopher Robin has been taken to a horrible place called the Skull by the monstrous Skullasaurus. Owl equips the gang with a map and they set off on a treacherous quest to save their friend. Thus, Pooh, Piglet, Tigger, Eeyore and Rabbit end up facing numerous horrors and perils in the outside world beyond the sanctuary of the Hundred Acre Wood - not just from around them, but even from within…

Pooh's Grand Adventure is considerably Darker and Edgier than past stories in the franchise. Though most previous Pooh stories would feature moments of drama, this is more drama than most standard Pooh fare. It's also the first Big Damn Movie of the franchise.

The movie is loosely based on In which Rabbit has a busy day, and we learn what Christopher Robin does in the mornings story from the original book, which was also partly adapted for Winnie the Pooh. Some of its settings, as well as the movie's main theme, would later be adapted into Kingdom Hearts II.

I've hung a wish on every star
It hasn't done much good so far
I can only dream of you.
And wonder if you're dreaming too..
... Wherever you are.

Pooh's friends finally find Christopher Robin, who reveals he was really going to school, and the growling sounds of the Skullasaurus were just Pooh's tummy.

Pooh's friends finally find Christopher Robin, who reveals he was really going to school, and the growling sounds of the Skullasaurus were just Pooh's tummy.