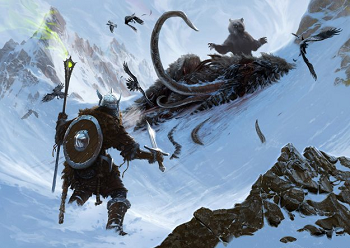 Book your vacation to scenic Skyrim today!
"Where its cold, and ice hits your skin
Few can stomach how harsh it is
In the woods lies a Great Old One
Who'll tear the flesh, right off your bones..."
— 3 Inches of Blood, God of the Cold White Silence
Advertisement:

When The Dark Lord rises to gather his armies and bring destruction upon the lands of men, elves, dwarves, and the race of funny Little People, he often does this from a stronghold built in the most frigid, dark, frigid, remote, frigid, cold, benighted corner of the wasteland that in most cases is simply called "the North."note In the Francophone world, the band of cold lands northwards of the 60°N latitude are treated as parts of a large biome, which include the boreal forests, tundras and frozen wastelands, named "the Great North" — le Grand Nord.

This trope may stem from how generally inhospitable the North often is to human (and other) life (at least in the Northern hemisphere). While a gentle cover of snow can imply romance, and snow can often be used to create an incredibly beautiful and peaceful otherworldly air, when taken to blizzard-level extremes it becomes an icy hell. And its blustery wind is usually a degree worse than that which comes from the other cardinal directions to the point that it's frequently portrayed in a rather humanoid form with a mind of his own. As many forms of Always Chaotic Evil creatures are somehow protected from extreme cold — for example, The Undead simply don't care about temperatures — the North is an environment where the Forces of Good are often at a disadvantage. Savage tribes draped in Pelts of the Barbarian often swarm down on the peaceful neighboring lands.

It might also have its roots in Medieval history, as the Vikings would often come from Scandinavia to the European coastlines to Rape, Pillage, and Burn. Even before that, one of the constant threats to the Roman Empire were the Celtic and Germanic barbarians to its north. History repeats the pattern elsewhere; in Asia, the Mongol hordes were from the frigid steppes and the surprisingly cold Gobi Desert, north of China proper. In Africa, the colonial invaders of the 17th-20th centuries were mysterious pale people from a land far to the north. In the Cold War, the enemy that represented the greatest threat to your way of life was so far north that they were over the pole and on the other side, a bit of geography that's true for American and Soviet alike! (However, in reality the Soviets always imagined America as "in the West").

Northern wastelands being what they are, now and then some ancient civilization or other figures out such an inhospitable place would be perfect for preserving the Sealed Evil in a Can.

It is interesting to note that while it is true that people living up north on a standard-shaped planet don't get all that much sun in the winter and tend to be a bit gloomy, people seem to forget that they also don't have a proper night in the summer (assuming an axial tilt). They also tend to forget that the temperature difference has less to do with being Northerly than it does with the distance from the equator. After all, the only reason we Earthlings consider North to be synonymous with cold is that the planet's inhabited continents extend northward to cold parts of the Northern Hemisphere and, on average, very little south of Tropic of Capricorn. The only iced-over landmass of the Southern Hemisphere, Antarctica, is isolated by distance and scarcely habitable.

The roots of this trope could also lie in the fact that most major religions originated in warm locations: the Abrahamic ones in Mesopotamia and the Levant (Judaism and Christianity) and the Arabian Peninsula (Islam); the Dharmic ones (chiefly Hinduism and Buddhism) in India; Taoism, Confucianism, and Chinese folk religion in mostly-temperate China; and Shintoism in temperate Japan. These were all locations where cold weather was associated with winter and its connotations of the "death" stage of the seasonal cycle rather than being the simple fact of life it becomes when actually living Up North.

On the other hand, people in those climates tend to portray very bad places — such as Hell — as hot. It is the people who live in the North who insist that Hell is cold.

Santa Claus is unrelated... usually. See also Mysterious Antarctica. Grim Up North is the frigid sister trope of The Savage South. Strictly, this trope requires a warmer region for the North to contrast with; if an entire planet is frozen, it's an Ice World. Might also be a case of North Is Cold, South Is Hot. Contrast Fire and Brimstone Hell where the forces of Evil inhabit a land or dimension of extremely hot temperatures.

The Trope Namer appears to be the Justified Ancients of Mu Mu song "It's Grim Up North", which contains a list of Northern English cities. That said, this trope is not to be confused with Oop North — although they can overlap, seeing as Northern England isn't exactly a barrel of laughs either (but at least it's not Luton). For that matter, should you dare venture a wee bit north of Oop North, beware the Violent Glaswegian.

The Army of the White Walkers

Beyond the Seven Kingdoms, the Wall, and even the Wildlings, in the northernmost parts of the world, the White Walkers summon an army of the dead to bring winter to the south.

The Army of the White Walkers

Beyond the Seven Kingdoms, the Wall, and even the Wildlings, in the northernmost parts of the world, the White Walkers summon an army of the dead to bring winter to the south.