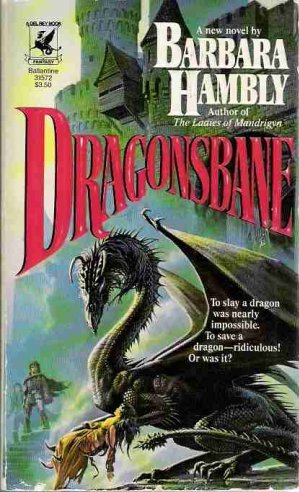 Dragonsbane is a fantasy novel by Barbara Hambly, first published in 1985.
Advertisement:

John Aversin is the only living man known to have slain a dragon. He's not particularly keen to do it again, but when he's summoned to the royal capital to deal with a dragon there, he reluctantly goes. Accompanying him is his wife, Jenny Waynest, a half-educated wizard, who will face her own challenges in the city.

The novel deconstructs a lot of the tropes of knight-vs-dragon legends. Slaying a dragon is difficult, messy work, and definitely not a job for a lone man with a sword. The nobility who inhabit the royal capital are not particularly noble, and when it comes down to it, the dragon is less of a problem than some of the human beings.

Followed years later by a sequel trilogy, consisting of Dragonshadow, Knight of the Demon Queen, and Dragonstar.