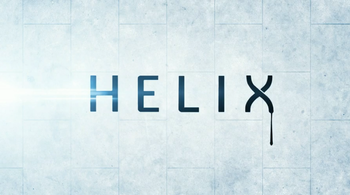 Helix is a 2014 Syfy Original Series, centering around Dr. Alan Farragut (Billy Campbell) and his team of CDC staff who have been dispatched to an arctic private research facility, Arctic BioSystems, to contain an unknown virus. Farragut and his team must contend with both the unknown pathogen and unforthcoming scientists reluctant to disclose the virus' origin or its basis in their unregulated research. Matters worsen when Alan's brother Peter, one of the first research scientists infected, escapes from isolation, while Alan's team begins to realize that The Virus not only grants Super Strength, but rewires its victims' brains to become a "perfect contagion machine."

And that's just the beginning of the problems that Farragut and his team encounter. Arctic BioSystems is the cutting edge biological research facility, where humanity's greatest minds take advantage of the isolation - both environmental and legal - to perform the most dangerous of experiments in pursuit of the impossible - and the unthinkable. With stakes this high, everyone has their own agenda - including him and his team.

While heavily advertised before its premiere as a fairly realistic horror series, or at least with some grounding in real-life science, halfway through its first season (around episode 7) Helix undergoes a drastic Genre Shift, centering around the virus actually being an element in a centuries-spanning conspiracy being conducted by immortal meta-humans. Basically it was promised and framed as John Carpenter's The Thing (1982), but quickly turned into a Resident Evil-style mashup - then at the end of Season 1, after so much buildup surrounding the arctic facility, they blow it up, and Season 2 moves to a remote island in the Pacific Northwest. By mid Season 2 it barely resembles what it was initially marketed as. The Chris Carter Effect was also strongly in play.

The show was canceled shortly after the end of its second season. According to Aintitcool.com's report, the ratings were abysmal - so low, in fact, that they were below the threshold at which ratings can even be nationally measured.