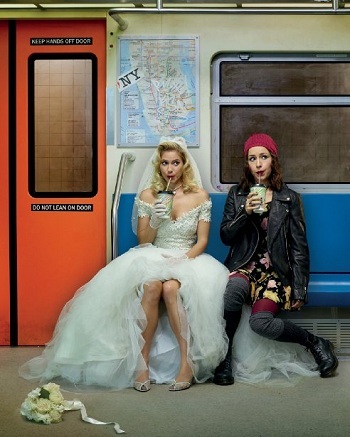 Becca and Lolly
"If you could go back and change one thing about your life—one decision, one answer, one mistake—what would you do? Knowing everything you know now, would you make the same choice and somehow get it right this time? Or would you start over?"
—Becca, from the pilot
Advertisement:

Hindsight is an American television series that began airing on VH1 in 2015. The pilot episode aired on January 7, 2015. On March 16, VH-1 renewed the series for a second season. However, VH-1 changed their mind in late August, cancelling the series right before shooting on season 2 began.

The story follows Becca Brady (Laura Ramsey), who, nearing 40 and on the eve of her second marriage, begins to question the entire course of her life. Plagued with nostalgia and self-doubt, she rides an elevator, falls unconscious, and is shocked when she wakes up and finds herself back in 1995, almost twenty years in the past, on the morning of her first marriage.

Becca still has her memories from 2014, but the nineteen years in between have yet to happen. Seeing this as her second chance at life, Becca sets out to rewrite her entire life and try her best not to make the same mistakes again.