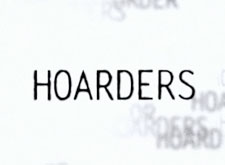 Compulsive hoarding is a mental disorder marked by an obsessive need to acquire and keep things, even if the items are worthless, hazardous, or unsanitary.
Advertisement:

Hoarders is an A&E Reality Show which provides a glimpse into the lives of people suffering from compulsive hoarding. A typical episode focuses on two hoarders whose situation has deteriorated to the point that they face serious financial/legal/personal consequences unless they get the hoard under control. A therapist who specializes in this type of behavior meets with the hoarder ahead of time to assess the problem, and a cleanup crew consisting of professional cleaners, friends, family members, and volunteers is then brought in. The goal is to return the property to a more livable state in a short period of time, usually two days, with the therapist guiding the hoarder to make sensible decisions about what should or should not be kept.

Hoarders has proved itself an incredibly popular show, being A&E's most-watched premiere if Wikipedia is to be believed. Probably because it caters to our collective interest in mental disorders. Watchers beware: After a few episodes you might get fear-driven urges to clean your own house. But maybe that's a good thing.

. Many episodes are also available on Netflix.

The series ran for six seasons on A&E, from 2009 to 2013. Lifetime then picked it up for a series of "Where Are They Now?" specials in 2014, followed by a seventh season (under the altered title Hoarders: Family Secrets) in 2015. The series moved back to A&E starting with the eighth season premiere in January 2016. A tenth season premiered in March 2019.