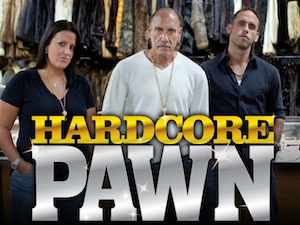 American Jewelry and Loan is owned by Les Gold, a 62-year-old man who is the son of a pawnbroker who once owned Sam's Loans, a now-defunct pawnshop on Michigan Avenue in Detroit. Les first opened American Jewelry at the Green Eight Shopping Center on 8 Mile Road in Oak Park in 1978, moving to its present location in 1993.

In 2011, American Jewelry expanded to its second location when it acquired Premier Jewelry and Loan in Pontiac; the new location was featured in the first few episodes of Hardcore Pawn's fifth season and in two episodes of the sixth season, where Seth deliberates selling the Pontiac location behind Les's back.

Les's only son, Seth, a graduate of the University of Michigan who initially pursued a career in medicine before joining the family business, is the general manager, Les's business partner, and handles the shop's marketing. Seth claims that if it wasn't for him, the shop's only marketing would be "an ad in the Yellow Pages". The co-manager is Les's daughter, Ashley (a college graduate from Michigan State University with a bachelor's degree in business administration and a graduate diamond certification from the Gemological Institute of America), who, as the series debuted, returned to the shop after taking some time off for maternity leave. The sibling rivalry between her and Seth is a common element of many episodes.

In December 2015, it was announced that Ashley would be departing from the show. No new episodes have aired since, although this didn't stop American Jewelry from opening further locations — a third location opened in June of 2016 when it acquired Joey’s Pawn Shop in Hazel Park, and a fourth will open in early 2021 in an ex-Payless Shoe Source store in Southgate.