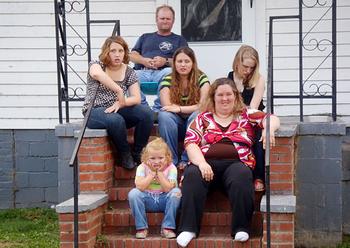 "A whole family, in a garage, grinding a deer that was hit by a car into sausage. The little girl played with its head. I dare you to find anything that's more genuine than that anywhere in the world."
— Cracked, "4 Ways Honey Boo Boo Redeemed Reality TV

Here Comes Honey Boo Boo is a Reality Show program which featured pageant participant Alana Thompson (Honey Boo Boo), along with her mother Mama June Shannon, father Mike Thompson (Sugar Bear) and her three older sisters. The show was mostly filmed in and around the family's hometown in rural McIntyre, Georgia.note located approximately 30 miles (~50 km) east of Macon and 110 miles (~180 km) south of Atlanta It was a spinoff of Toddlers & Tiaras. It ran on TLC from 2012 to 2014, making the title character the Poster Child (and former page image) for Network Decay.

On October 23, 2014, TMZ posted an exposé of June Shannon dating a man who was convicted of child molestation a decade before, generating a PR disaster that led to the show being canceled the following day. That same day, the victim of the molestation who blew the whistle on June came forward and turned out to be June's own daughter, Anna, creating a huge uproar against June and the series in general. Alana and her family would eventually return to television in 2017 on the We TV Spin-Off show, Mama June: From Not to Hot, which follows Mama June trying to lose 300 pounds of weight.