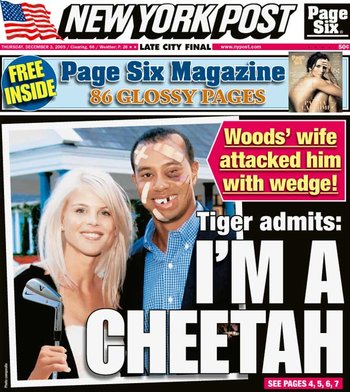 An unflattering headline was enough to scare

.note For those curious, the image is Photoshopped.

A Role-Ending Misdemeanor refers to where a performer or creator who engages in bad behavior off-the-job is fired in order to protect a project's reputation — or, if independent, is forced to either reduce their public activity or outright leave the public scene because their image is too deeply tarnished.

This could be anything from a first-time offense to the latest in a long string of misdemeanors (or felonies). Creators with a reputation for being difficult can get the boot simply because no one will work with them any longer. Creating media is still a job, after all: you have to show up on time and perform competently or you'll be shown the door. If this person is a cast member on a long-running TV show, the character will probably be McLeaned. If they are integral to the show's foundation, it could end the project altogether.

If the person in question has a self-destructive habit (i.e. alcoholism), giving them the boot could be seen as a desperate gambit to force the rejected star into getting help. Results vary. But if they get their act together, it's not unheard of for a person like them to make a return appearance somewhere down the line.

In some cases, this trope is used when a person's reputation has suffered to the point that it attracts bad press to the project; a person who is Convicted by Public Opinion can seem like too great a liability, regardless if they did it. Or that perceived behind-the-scenes trouble is the excuse used and they are actually The Scapegoat for a more complicated problem.

Compare Creator Killer and Star-Derailing Role for when it relates to a fall from grace from a failed work. See also Undermined by Reality, Actor Existence Limbo, Contractual Purity, and Overshadowed by Controversy. Contrast No Such Thing as Bad Publicity, Controversy-Proof Image, and The Tyson Zone. See also Put on a Prison Bus for a fictional version.