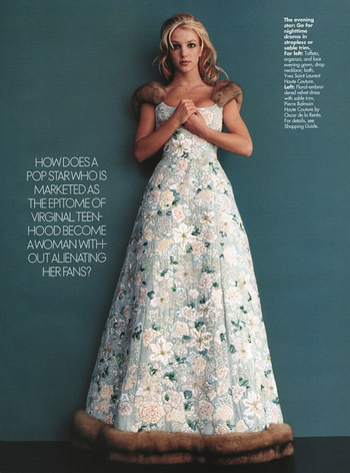 With great difficulty.
"I'm honoured that people would think of me as a role model. On the other hand, I think it's sort of dangerous to choose a person and lift them so high — because at one point, I'm going to play a role that somebody doesn't like!"
— Anika Noni Rose, on her role in The Princess and the Frog
Advertisement:

When a young actor or other performer comes to public prominence in association with clean, wholesome family entertainment roles, the expectation of studios and audiences is that the actor's personal life will reflect the same upright morality of the character they play.

Heaven forbid, then, that said actor should be found engaging in perfectly legal, perfectly normal adult activities like drinking alcohol and/or having sex. And should said actor take a role in a production where they'll do things like nude scenes, using foul language or engaging in criminal behavior, then Moral Guardians will arise against that actor for betraying their expectations or somehow corrupting their young audience.

As most of the examples on this list will show you, this trope usually (although not exclusively) applies more to female celebrities than males. Actors are most often hit by this, but it can also apply to pop stars whose fanbase is largely comprised of teen and tween girls.

Some actors deliberately seek out such roles precisely to shed their image, and seemingly the majority of male ones lately go through a phase of sporting stubble for photoshoots and red-carpet events to remind us they're not boys anymore (even if they are still playing high school students).

There are two sides to what happens with this controversy. First is that Moral Guardians really have no right to get upset that it is "corrupting our youth" because an individual of a certain age is well within their legal rights to smoke, drink, swear, have sex, etc. On the flip side, being a public figure, especially one who is popular and well-known amongst young people, carries a certain degree of responsibility for the influence one may have since they will be treated as a role model. George "Superman" Reeves, for example, took great pains to not smoke or be seen with his lady-friends in front of children. (He was also careful because kids wanted to see if he was as invulnerable as he was on TV.)

This will very often actually be enforced by a morality clause in the contract.

A form of Typecasting. See also Old Shame and Not Allowed to Grow Up. May result in the actor/singer hating the job, but still enjoying the publicity that comes with it. Contrast So My Kids Can Watch, which is when an "adult" actor takes on family-friendly roles, usually so that their children can watch them without being exposed to violence and/or sex. For a specific supernatural version of this trope, see Virgin Power. Subtrope of Slave to PR.

Exactly what counts as "purity" varies wildly from culture to culture — see Values Dissonance. For the polar opposite of this trope see Controversy-Proof Image.

Real Life Examples (in alphabetical order when not Disney):

There are some notable aversions and inversions, where the actor or actress's first role (or at least breakout role) is in a decidedly adult production, only for them to move onto more family-friendly fare. Compare Bleached Underpants, Rated G for Gangsta.

Animators
Athletes
In general, sports stars are often forced to act as "role models" to an even greater degree than most celebrities are.
Musicians
Professional Wrestlers
Voice Actors
Other