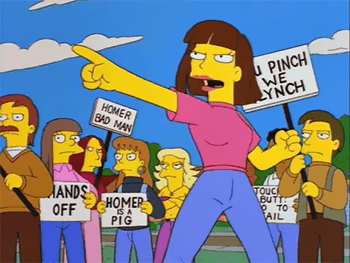 Who cares what the court has to say? Justice is short for "just us"!
"Peter, you may have dodged your legal troubles, but things will get much worse. There is still the court of public opinion."
— Matt Murdock, Spider-Man: No Way Home
Advertisement:

Usually when a person's guilt can't be proven (or has not yet been proven or disproven, without counting ridiculous technicalities) in a court of law, it is assumed that they are innocent. But in the court of public opinion, it tends to be the exact opposite. The public (or even the authorities) are convinced you're guilty; they just don't have enough hard evidence to prove your guilt. Now, this doesn't necessarily mean the person in question is guilty. It just means that they have already been tried and convicted by public opinion. The public can either be completely right or dead wrong (and are usually the latter, per the Rule of Drama).

Whenever someone is placed in the dock accused of "Crimes Against Humanity", you can be pretty sure this trope is in full effect. The same goes for rape because Rape Is a Special Kind of Evil.

If the public is particularly displeased with a juridical decision, they might take the matter into their own hands. See Witch Hunt and Vigilante Execution, although the public does not necessarily have to be unjust and violent. If the convicted is convinced that it is hopeless to appeal, he might as well become the monster they asked for. Guilty Until Someone Else Is Guilty may be the only way the public will be convinced of the person's innocence.

Usually combined with Reformed, but Rejected. Compare Shamed by a Mob, Pariah Prisoner, and Pædo Hunt. See also Never Live It Down for the fan version. Insidious Rumor Mill is done to invoke this kind of reaction against someone to ostracize and isolate them.

This is sadly Truth in Television, but No Real Life Examples, Please! Though if you wish to read about that, The Other Wiki has articles on the court of public opinion

and trial by media

At the end of the episode, Groundskeeper Willie proves Homer innocent with video evidence, and after some Unreadably Fast Text retracting their allegations against him (as part of a Long List of retractions), the media immediately proceeds to whip up another frenzy against Willie, painting him like a perverted voyeur who nobody in Springfield is safe from, which even Homer himself buys into.
Homer: Ohhhh, that man is sick!
Marge: Groundskeeper Willie saved you, Homer.
Homer: But listen to the music! He's evil!
Marge: Hasn't this experience taught you that you can't believe everything you hear?
Homer: Marge, my friend... I haven't learned a thing.