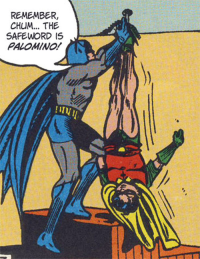 Read the trope description, then snark about the situation.
"My safeword is 'OW!'"
— T-shirt slogan
Advertisement:

Sometimes a word that really means "No" is needed, but the actual word "no" isn't available for one reason or another. A "safe word" can be aimed at the person who interacts with you, to underscore that you really need to hit the emergency brake. Or it could be meant for a third party that might come to your aid. Or both.

Of course, any word can be used as a safe word. And the concept is not limited to sexual situations either. Commonly used by undercover operatives while wearing a wire or being in a bugged room, people engaged in a combat sport, and people engaged in a setting where reality and fiction could easily be mixed up. (See Covert Distress Code.)

Compare Safe, Sane, and Consensual and You Called Me "X"; It Must Be Serious. Contrast Trust Password.