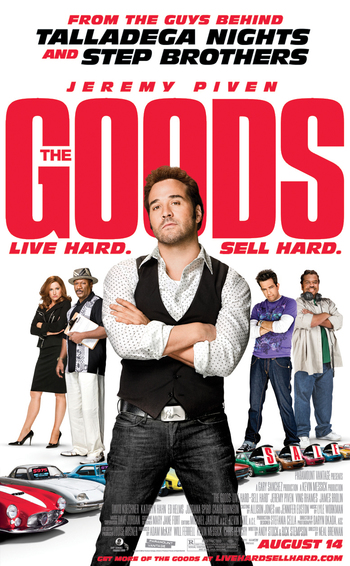 "I'm Don "The Goods" Ready. I have hair on my balls, and I sell cars. The end."
—Ready, introductory speech to the employees
Advertisement:

Jeremy Piven stars as Don Ready, who leads a sort of "freelance" team of car salesmen (Ving Rhames, David Koechner, and Kathryn Hahn) who rent their services out to dealerships. For the upcoming Fourth of July weekend, they've been hired by Temecula, CA, dealer Ben Selleck (James Brolin) whose family dealership is on the verge of bankruptcy. His employees (Tony Hale, Ken Jeong, Charles Napier, and Jonathan Sudowski) are all apprehensive about the so-called "mercenaries" taking away their commissions, but Ready's team helps motivate them to be better sellers. Don, however, is distracted by Selleck's daughter Ivy (Jordana Spiro) and starts to consider finally settling down. Unfortunately for him, she's engaged to Paxton Harding (Ed Helms) the son of Ben's main rival dealer — and an aspiring pop star.

While promoting the movie, Piven (along with Jeong) guest-hosted an episode of Monday Night Raw. While almost all of the celebrity guest hosts were hated by the fans, Piven's appearance is generally considered to have been the hands-down worst out of all of them, due mainly to his complete lack of knowledge about professional wrestling.

Tropes found in this film