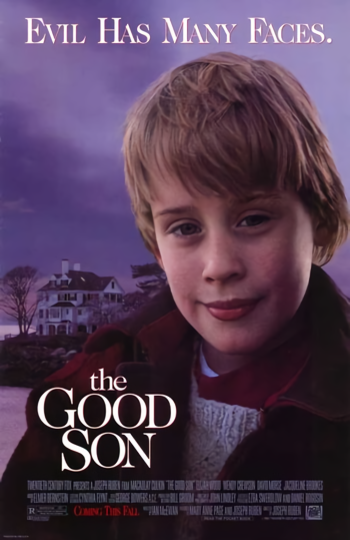 This role is a little different from Kevin McCallister.
Advertisement:

The Good Son is a 1993 horror thriller film starring Macaulay Culkin and Elijah Wood. The film was directed by Joseph Ruben, previously known for such films as The Stepfather (1987) and Sleeping with the Enemy (1991), and based on a script by acclaimed novelist Ian McEwan, which was rewritten by others due to Executive Meddling.

It is about Henry Evans (Culkin), a psychopathic boy terrorizing his cousin, Mark (Elijah Wood). Mark tries incredibly hard to convince his family that Henry is psychotic and evil, a fact that should be noticed even if you're three miles away. Mark continually tries to stop Henry from getting worse, only to have Henry make him look worse at every turn...

Compare with The Bad Seed, to which this movie bears more than a passing resemblance (only The Bad Seed is focused on a girl).