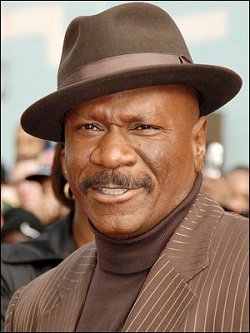 Irving Rameses "Ving" Rhames was born May 12, 1959 in New York City. He discovered a love of acting in High School, and got his start in the Broadway play The Winter Boys, and from there worked in a number of Soap Operas and supporting roles until his big break as crime boss Marcellus Wallace in Pulp Fiction.

He has since worked in the Mission: Impossible movies (to this day, he is the only actor outside of Tom Cruise to have appeared in every film of the franchise), Con Air, Dawn of the Dead (2004), and even Lilo & Stitch, among many other roles. Unfortunately, much of his more recent output has consisted of Direct to Video movies and being a major spokesman for Arby's

(he's the "We Have the Meats" (trademark) voice in their

Tropes relating to Ving Rhames include: