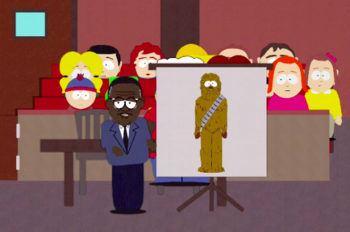 "Ladies and gentlemen of this supposed jury, it does not make sense! If Chewbacca lives on Endor, you must acquit! The defense rests."
Isaac: I don't really understand what's going on, but he just broke down crying. What do you suppose it means, Miria?
Miria: I think it means we won!
— Baccano!
Advertisement:

A Chewbacca Defense is a way of "winning" a debate through methods other than logic and reasoned argument. The essence of it is that if you get your opponent to give up, then you "win". Even if you just spout patent nonsense — in fact, especially if you spout patent nonsense, because there's just no way to argue against it.

The sad part is that it works. Even in Real Life. Most politicians are quite adept at it. Indeed, they need to be, given how often they have to defend the indefensible. As such, the Chewbacca Defense commonly relies on Logical Fallacies and insane rhetorical techniques, like:

The trope is named after the "Chef Aid" episode of South Park, in which Johnnie Cochran — famous for his Courtroom Antic in defending O. J. Simpson in his famous murder trialnote Indeed, this scene was inspired by his antics in that trial, in which it was commonly believed that he and his team successfully did this for real. But it's not likely — most legal analysis of the Simpson case

suggests that O.J. was acquitted because the prosecution pretty much botched the case (jury selection, mishandling DNA evidence, having Simpson try on the glove). The closest thing Cochran did to the Chewbacca Defense was repeating his line, "If the glove doesn't fit, you must acquit!" — heavy on the "buzzword" strategy, and directly parodied by this South Park episode — defends his client by arguing that Chewbacca does not live on Endor, when not only did no one claim he did, it has nothing to do with the case. He then yells that the very fact that he's talking about Chewbacca shows the absurdity of the proceedings and the weakness of the case against his client. And it works! Indeed, many Real Life lawyers and politicians have spoken of the "Chewbacca Defense", even though in the context of the South Park episode itself, there were a lot of inaccuracies, as more than one

lawyer has pointed out

.note The biggest is that "Chef Aid" involves a civil case, in this case copyright law. Any attempt to confuse the jury into ruling contrary to law risks the judge throwing out the verdict and ruling otherwise (a "Judgment Notwithstanding the Verdict", or JNOV). The evidence was so clear-cut that they shouldn't have needed a jury to resolve it.

A common Courtroom Antic (even though Real Life courts are wise to this and will nip it in the bud pretty quickly); if it works too easily, you might be looking at a Kangaroo Court. Also a possibility for a Simple Country Lawyer using his Obfuscating Stupidity. Compare Confusion Fu, Passive-Aggressive Kombat, Refuge in Audacity, and Abomination Accusation Attack.

For the record, Chewbacca doesn't live on Endor, he lives on Kashyyyk. In fact, nobody lives on Endor, because it's a gas giant. Ewoks live on one of Endor's moons. Therefore, Cochran's entire argument, in addition to being nonsense, is also completely wrong. Which may or may not have been the whole point since Chef was clearly the victim of a Frivolous Lawsuit and deserved to win. If Chewbacca lives on Endor, you must acquit, and he doesn't, so the jury shouldn't have acquitted and should have sided with Chef instead.

My hair is a bird. Your article is invalid.