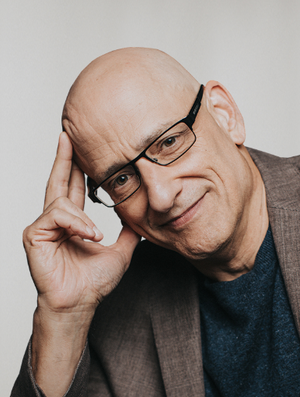 He worked as a radio and newspaper reporter and a radio news writer, then became a full-time writer. Some of his novels were adapted into films, such as White of the Eye, Don't Say a Word and True Crime, and he wrote some screenplays such as A Shock to the System and One Missed Call.

He once hosted Andrew Klavan on the Culture, more shortly known as Klavan on the Culture, a series of short video clips by the internet TV channel PJTV. The videos had Klavan poking fun at liberals by either outright showing the flaws in their arguments or sometimes through Stealth Parody. Since 2016, he hosts a satire-heavy politics-centric show, The Andrew Klavan Show, partnering with Ben Shapiro's site The Daily Wire.

Klavan's topic of rants tend to vary from high taxes, religion, political figures, and many more. While the bulk of his work at the Daily Wire is political, he also reviews films, series and video games from time to time if they're of particular topicality.

Tropes in Andrew Klavan on the Culture:

Tropes in The Andrew Klavan Show: