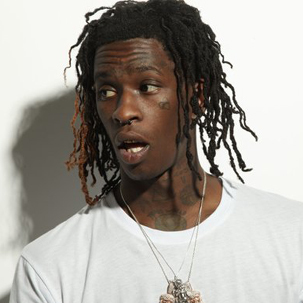 And this is just his normal clothing
Influences: Wyclef Jean, Floyd Mayweather, Swizz Beatz,Future, Rihanna, Gucci Mane, Harambe, Kanye West
The Cloudcuckoolander of Trap Music, Jeffrey Lamar Williams (born August 16, 1991), better known by his stage name Young Thug, is a rapper from Atlanta, Georgia known primarily for his quirky, eccentric, offbeat vocal and rapping technique and fashion style. He first received attention from collaboration with Birdman and Gucci Mane, along with his collaboration with other rappers such as Rich Homie Quan, Lil Baby, and Gunna. Thug initally released a series of independent mixtapes beginning in 2011 with I Came from Nothing. In early 2013, he signed with Gucci Mane's 1017 Records note  who he left in 2014 after Gucci was imprisoned for the last time around that year , and later that year he released his label debut mixtape 1017 Thug to critical praise.
Advertisement:

Young Thug received mainstream recognition in 2014 with the singles "Stoner" and "Danny Glover" in addition to appearances on several singles, including T.I.'s "About the Money", Tyga's "Hookah", and Rich Gang's "Lifestyle." After getting the attention of many label-heads such as his then-manager Birdman, he was later signed to Lyor Cohen's 300 Entertainment and later collaborated with Birdman's Rich Gang on the mixtape Rich Gang: Tha Tour Pt. 1. In 2015, he released a number of mixtapes, including Barter 6 and two installments of his Slime Season series. These were followed in 2016 by the commercial mixtapes I'm Up, Slime Season 3, and Jeffery. In 2018, he released a compilation album Slime Language showcasing the artists signed to his own label YSL Records.

Young Thug also became known for his feature on the 2017 hit song "Havana" by pop singer Camila Cabello, which reached number one on the Billboard Hot 100 in January 2018, becoming Young Thug's first number one and top ten single. Williams was awarded the Grammy Award for Song of the Year at the 61st Annual Grammy Awards for his songwriting contributions to "This Is America" along with Childish Gambino and Ludwig Göransson. In May 2019, he released the single, "The London" (featuring J. Cole and Travis Scott)–becoming his second highest charting song on the Hot 100 as a lead artist, debuting and peaking at number 12. The song was featured on his debut album, So Much Fun, released later that year, which included his highest charting song on the Hot 100 as a lead artist, "Hot" featuring Gunna, peaking at number 11 (boosted by the remix with Travis Scott).

Tropes applying to Young Thug include: