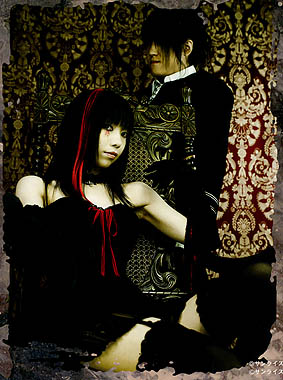 Pictured: Yui and Tachibana.
"The belief modern humans have in fairies has lessened over the years. With our music, we aim for the reconstruction of the fairy world devastated by this lack of belief."
Advertisement:

Yousei Teikoku, also known as Das Feenreichnote  literally meaning "The Fairy Empire," is a Japanese band with several different genres under its belt (see below) that got its start in the '90s. Their songs have been featured in several anime and games including Venus Versus Virus, Future Diary, Black God, My-HiME, Queen's Blade note The Spiral Chaos games, not the anime, Seikon no Qwaser, Innocent Venus, and Magical Pokaan.

Former members of the band include:

And their discography includes: