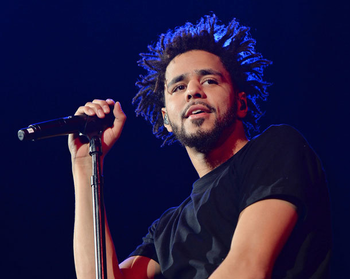 Born sinner, the opposite of a winner.
Influences: Tupac Shakur, Nas, Jay-Z, Eminem, OutKast, Kanye West, Alicia Keys, Master P, Canibus, Big Pun
"I feel like this: Whatever is in your path and in your heart, you need to do."
Advertisement:

His debut album, Cole World: The Sideline Story was released in September 2011, and hit number one on the US Billboard 200, Top R&B Albums and Top Rap Albums chart, selling more than 218,000 in its first week.

He received a nomination for Best New Artist at the 54th Grammy Awards.

On December 2nd, he released a documentary called Eyez exclusively for Tidal. The documentary included behind the scenes footage of the making of his next album, 4 Your Eyez Only. He also showed off two music videos for the songs, "False Prophets" and "everyone dies" which aren't on the album.