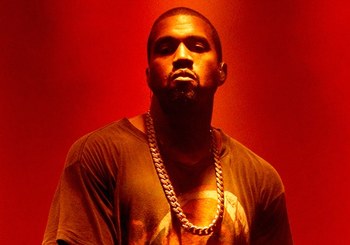 Our Lord and Savior, Ye.
Influences: Aphex Twin, A Tribe Called Quest, Daft Punk, The Fugees, The Killers, John Mayer, Modest Mouse, The Pharcyde, Portishead, Radiohead, Sade, J Dilla, Wu-Tang Clan
"I'm a problem, that'll never, ever be solved.
And no matter what, you'll never take that from me.
My reign is as far as your eyes can see."
— "Amazing"
Advertisement:

Yenote yes, that is currently his legal name; he had it changed in late 2021, reportedly inspired by the prominent use of the word "ye" in the Bible (born Kanyenote Pronounced "KON-yay" and NOT spelled "Kayne" Omari West; June 8, 1977) is an American rapper, singer, songwriter, record producer, and fashion designer from Chicago, Illinois (born in Atlanta, Georgia). While he has become one of the most polarizing musicians of the 21st century, few can claim to have impacted the medium in the way West has, by means of both his artistic statements and a long, long list of controversial actions.

Originally a producer in the mid-90s for local Chicago artists, eventually making it big as arguably the secret ingredient to Jay-Z's Career Resurrection come the Turn of the Millennium, he started dreaming of becoming a rapper. However, the emphatically middle-class West—the son of a photojournalist and an English professor, and partly raised in the suburbs—didn't fit the profile for the Gangsta Rap popular at the time, and was long pigeonholed as an illegitimate "producer-rapper" before being reluctantly being signed to the label he was an in-house producer for, Jay-Z's Roc-a-Fella Records.

Everything changed on October 23, 2002, when he was involved in a car crash after midnight that shattered his jaw. This inspired his song "Through the Wire"; the song would eventually be re-recorded and included on his debut album The College Dropout, which opened to mass critical and commercial fanfare, jump-starting his career.

In 2015, he announced his intent to run for president of the United States in the 2020 election, and to the surprise of many, his campaign as a third-party candidate indeed materialized on July of that year. It was largely unsuccessful — in part because he only qualified for ballot access in 12 states — but he's expressed interest in trying again for the 2024 election.

The music video for "Heartless" from Kanye West's forth album 808s and Heartbreaks uses rotoscoped animation to show West wandering alone at night.

The music video for "Heartless" from Kanye West's forth album 808s and Heartbreaks uses rotoscoped animation to show West wandering alone at night.