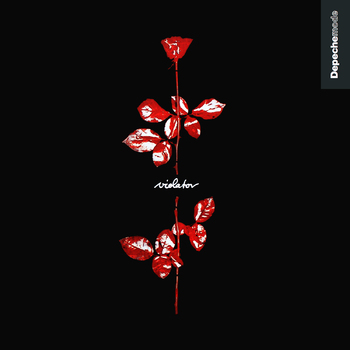 Violator, released in 1990, is the seventh studio album by English Alternative Dance group Depeche Mode. Co-produced by New Order and U2 engineer Mark "Flood" Ellis (who was producing Nine Inch Nails' 1989 debut album at around the same time, thanks to the overlap in recording sessions), the album continues the Darker and Edgier brand of Synth-Pop that had defined the band's sound since 1983's Construction Time Again while also orienting it in a somewhat new direction hinting at what their work would later become, reducing the industrial influences and concurrently ramping up the Alternative Rock elements. Compared to the previous album, Violator offered a much more free-form composition and production style, with much more open-ended demo recordings and a general absence of pre-production, both of which enabled the musicians to attain a higher degree of creative freedom than on previous records.

The resulting album was an unprecedented commercial success, serving as Depeche Mode's mainstream Breakthrough Hit and turning the band into international superstars. The single "Enjoy the Silence" became a Top 10 hit in both the US and the UK, while the album as a whole peaked at No. 2 on the UK Albums chart and No. 7 on the Billboard 200— marking the band's first album to reach the top ten in the US— in addition to topping the charts in Belgium, France, Greece, and Spain. The album later went on to become the 17th best-selling album of 1990 in the US, the 39th best-selling album of the year in the UK, and the fifth best-selling album of the year in the entire European Union. Violator was later certified triple-platinum in the US, double-platinum in Canada, platinum in France, Germany, Italy, Spain, and Switzerland, and gold in the UK, Austria, and Sweden. Additionally, "Personal Jesus" became the highest selling 12" single on a Warner Music Group associated labelnote Sire Records, the band's distributors in the US and Canada due to a combination of its release half a year before its parent album and the controversy surrounding its Blasphemous Boast-based ad campaign. As a sign of the band's newfound fame, a signing party in Los Angeles initially expected to bring in a few thousand people at most ended up drawing roughly 17,000. The album still continues to sell well to this day, having peaked at No. 22 on both the Polish Albums chart and the Billboard Top Dance/Electronic Albums chart in 2017.

Violator was also a hit among critics, ranking as one of the highest-reviewed Depeche Mode albums to this very day and placing at number 342 on the 2012 edition of Rolling Stone's 500 Greatest Albums of All Time (later being bumped up to No. 167 on the 2020 revision), No. 444 on NME's similar list, and No. 390 on the 2020 edition of Acclaimed Music's dynamic list of the 3000 most critically lauded albums. Lead single "Personal Jesus" also ranked at number 368 on Rolling Stone's 500 Greatest Songs of all time and was voted by Q Magazine readers as being among the 100 greatest songs ever, and "Enjoy the Silence" won the award for "Best British Single" at the 1991 BRIT Awards. Violator has also maintained a consistent position among both fans and critics as Depeche Mode's best album and one of the best albums of The '90s (even if it didn't sound quite in line with the sounds that would dominate the rest of the decade). Additionally, Violator is considered one of the best albums from the brief cultural gray area between the end of The '80s and Nirvana's breakthrough in late 1991. Together with New Order's Technique from the previous year, Violator represented the peak of the first wave of alternative dance, with its two biggest acts at the time seeing greater levels of public prominence, commercial success, and critical acclaim than ever before or since.

Violator spawned four singles: "Personal Jesus", "Enjoy the Silence", "Policy of Truth", and "World in My Eyes". "Personal Jesus" marked Depeche Mode's sendoff to the 1980's, being their last material released during the decade, coming out on August 28, 1989.