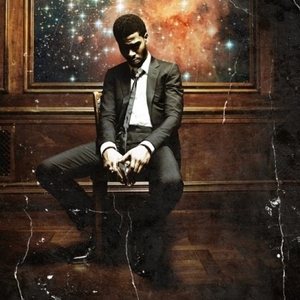 God, shine your love on me, save me, please...
Advertisement:

Cudi began gaining major recognition in 2008 upon the release of his debut full-length project, the mixtape A Kid Named Cudi, the most noteworthy result of which being the tape caught the attention of Kanye West, who signed Cudi to his G.O.O.D. Music label imprint by the end of the same year.

A year later, he released his debut album Man on the Moon: The End of Day to widespread acclaim, its defining traits being its epic concept-album scope, psychedelic aesthetic, and a prominent mix of influences from rap, R&B, and rock that made for great crossover appeal. This same cross of genres would resurface in various, more experimental forms throughout his future releases.

Cudi also ventured into acting when he was cast in How to Make It in America. He has since appeared in several films including Goodbye World, Need for Speed, Entourage, Bill & Ted Face the Music, Don't Look Up, and X. In addition, he has appeared on TV shows such as One Tree Hill, The Cleveland Show, Brooklyn Nine-Nine and Westworld.

Tropes related to Kid Cudi include: