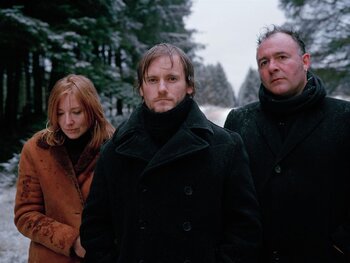 The other famous Trip Hop act from Bristol that helped codify and popularize the genre alongside Massive Attack and Tricky, Portishead is an English band that has been rolling around the music scene since 1991, and was named after a town eight miles west of Bristol. The band consists of the following members:

Dave McDonald is occasionally named their "fourth member", having served as engineer and producer and occasionally contributed instruments on all their albums.

These elements brought them critical and commercial success right out the gate with their debut Dummy, but their future releases pursued harsher, darker sounds. While 1997's Portishead explored a more bleak and aggressive variant of trip hop, 2008's Third — the band's first studio release in 11 years following Barrow putting it on hiatus — forwent the genre completely for a sound with influences as eclectic as krautrock, surf rock, doo wop, and John Carpenter soundtracks. Ever since then, although the band has mainly kept active through occasional touring and single releases, statements from Barrow have maintained that a fourth album is still on the table.

In 1994, the band members also wrote and acted in a short film titled To Kill a Dead Man; while the whole thing is available in the bonus section of their Roseland NYC Live DVD, footage from the film was also converted into the music video for the song "Sour Times", and stills of it were used in the album art of Dummy. It did, however, also come with an opening disclaimer in which the band stated that they "had grossly underestimated how tough it is to write, design, act and perform a short film."

During their hiatuses, Barrow has worked solo, as a member of the trio Beak, and as a member of the hip-hop supergroup Quakers. Gibbons released one album with ex-Talk Talk bassist Paul Webb, credited as Beth Gibbons and Rustin Man. Utley has done session and soundtrack work and was a member of jazz group Stonephace.