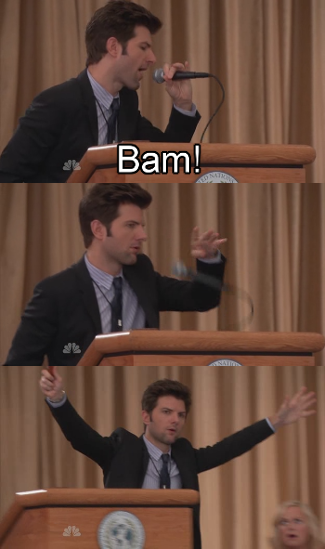 PIPE BOMB!
"All she needs is a mic drop. I swear, that's the only thing missing. She fucking owns everything that ever existed. She just needs a mic drop."
— The Nostalgia Critic, on the T. rex from Jurassic Park
Advertisement:

A character having just delivered an awesome speech or performance will emphasize just how awesome it was by purposefully toppling a microphone stand or dropping the microphone from shoulder-level height just before leaving the stage.

Since this is a showy, arrogant gesture, comedy is frequently wrought by having self-effacing or rule-conscious characters do it. Expect a wide range of audience reaction, from rapturous applause to silence. This action is often, but not always, accompanied by the stock phrase "<Name> out" or "Peace out".

Can also be parodied by NOT cutting out the sound while doing this, creating horrible-sounding noise. This is also why people hold the mic up high before dropping it - it's a cue for the sound tech to cut power to it.

The term "mic drop" has also been adopted to refer to a definitive statement for which there is no valid comeback or debate. ("He delivered the mic drop on the argument.")

Related to less-boastful use of this in stand-up comedy, the term is also used as Self-Deprecation akin to the Rimshot. (This is usually accompanied by “Thank you, ladies and gentlemen, I’ll be here all week.”)