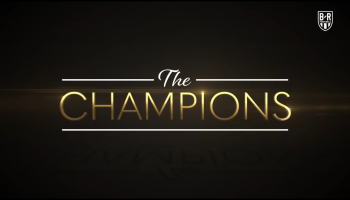 What happens when 800 of the world's most elite footballers and their managers live together under one roof? Players stop being polite...and start getting Real. This is... The Champions!
— The show's Opening Narration
Advertisement:

The Champions is a 2018 animated web video series, created by Andy Haynes, produced by Bleacher Report and directed by Adam and Craig Malamut, the sibling creators behind Game of Zones and Gridiron Heights. As opposed to the Malamuts' first series' mashup of the National Basketball Association and Game of Thrones and their second series' rapid-fire sketch comedy about the National Football League, The Champions takes the players and managers of the UEFA Champions League and sets them in a Reality Show setting, putting them in a Big Fancy House where they live together day-to-day when they're not playing football. Of course, this being a reality show, antics and rivalries flare up, often involving real life rivalries and controversies between clubs and players, putting a humorous spin on the grudges.

subchannel (usually on the Monday before Champions League gamedays), and on Reddit here

. A complete list of episodes can be found here

The Champions provides examples of:

...I could be your champion!