By Wall That Is Holey 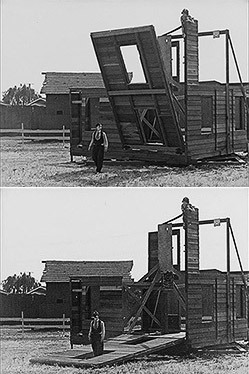 Safety windows don't all have glass.
"I genuinely hope that was an idea Shaq brought to the set. “Guys, I’d really like my performance to be inspired by Harold Lloyd.”
— Chris Sims and David Uzumeri on

A piece of masonry, architecture, or another very large object falls onto a character. Fortunately, they survive because they're standing exactly where the window or some other opening will be located when the building front drops.

Mario has to go into a hole in the falling rock to avoid getting crushed.

Mario has to go into a hole in the falling rock to avoid getting crushed.