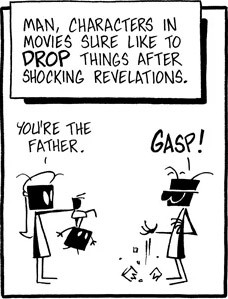 Good thing he wasn't holding the baby.
"Drop everything! (Unless it is a baby.)"
— Dave Barry
Advertisement:

Dramatic Drop is kind of a step-sib to Dropped Glasses and Slow-Motion Drop. Something very startling or utterly shocking is announced or discovered — and the person encountering the shock literally drops what they're holding in astonishment. It most often falls ...and falls... and shatters at their feet — an aural punctuation mark to the bewildering announcement.

It usually occurs in specific situations:

This is a very commonly used trope. It used to happen quite frequently with telephone receivers left dangling when someone gets shocking news, but the advent of cordless and cellphones has caused that usage to fall out of favor and usage. Used comedically in parodies of the ending of The Usual Suspects.

Alternative Title(s): Drop What You Are Doing