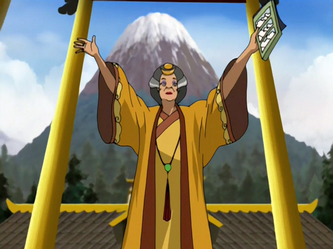 Aunt Wu makes her prediction that the village will not be destroyed by the volcano behind it.
"Man, sometimes I forget what a powerful bender that kid is."
—Sokka, about Aang
Advertisement:

One particular morning, Aang comes to a stunning revelation: Katara is hot.note Pun not intended. This revelation becomes even stronger when they meet a renowned fortune teller, Aunt Wu, and he overhears part of her prediction to Katara that "You are going to marry a powerful bender," but is dismayed when his fortune contains only a tiny (fake) counterpart love prediction. Later, Aunt Wu does her annual cloud reading and predicts that her village will not be destroyed by the nearby volcano. Meanwhile, Sokka tries to convince the locals that Aunt Wu's predictions are either false or can be explained by science. When Aang comes to him for advice, Sokka misinterprets it to mean he likes a local girl, and tells Aang to be aloof. This doesn't work, so Aang instead tries a rare flower that only grows on the rim of the volcano. When the group discover that the volcano's ready to blow, they have to convince the whole town that Aunt Wu was wrong and band together to avert the catastrophe.