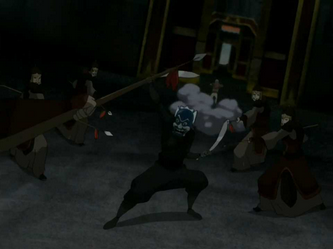 The Blue Spirit is surrounded by Fire Nation soldiers as Aang runs for the gate.
"If we knew each other back then, do you think we could have been friends too?"
— Aang to Zuko
Advertisement:

Sokka suffers from an illness due to his exposure to the elements during the storm. When Katara begins to contract the illness as well, Aang goes to a nearby herbalist institute in hopes of finding a cure for his friends. On his way to collect the remedy the herbalist recommends, Aang is kidnapped by a group of Fire Nation Yu-Yan archers, commanded by the newly promoted Admiral Zhao. However, a masked marauder, the titular "Blue Spirit," rescues Aang from Zhao; the "Blue Spirit" is knocked unconscious during the escape, and Aang discovers that he is Prince Zuko. Aang offers him friendship, but departs when he is rebuffed.