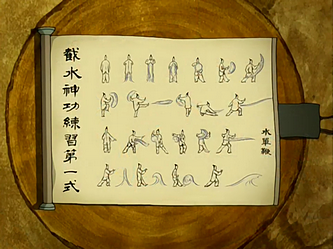 The scroll laid out for Aang and Katara to see.
"I'll save you from the pirates."
— Zuko, menacingly to Katara
Advertisement:

The gang stops in a village for supplies, although they are running dangerously low on money. However, while shopping, they come across interesting merchandise sold by rather questionable pirates— er, I mean, 'high-risk traders'. Among their wares is an expensive scroll diagramming waterbending forms, which Katara steals to help both herself and Aang learn waterbending. To her annoyance, it seems Aang quickly surpasses her in the skill, and her jealousy begins to take control. Meanwhile, Iroh goes shopping for his missing Pai Sho piece, and Zuko catches wind that the pirates are after a familiar-sounding trio, and so they join forces.