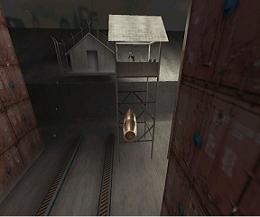 A bullet's-eye view of the action.
Advertisement:

Any time that the camera seems to be attached to a projectile (arrow, bullet, etc.) and/or chase after it as it flies through the air towards its target.

Usually subject to No "Arc" in "Archery" even in works where that trope is otherwise averted.

If a 3-D video game has a manually controlled projectile weapon, then in general, this trope will be used in order to facilitate better control of the projectile.

See also: Shaky P.O.V. Cam for a similar device used to represent the monster's vision. Surveillance Drone if the device stays in the air or Object Tracking Shot for following objects that aren't deadly.