"Fat Pizza pizzas, they're big and they're cheesy."
—Bobo Gigliotti 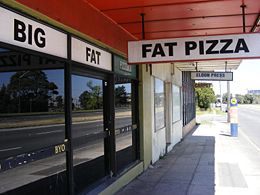 A cult Australian comedy series created by Paul Fenech, Pizza is about the local Fat Pizza shop, staffed by a Ragtag Bunch of Misfits like you've never seen. The gang, Pauly, Sleek (Put on a Bus after The Movie), Bobo, Habib and others, get into crazy antics involving drugs, police, bikers and even the supernatural. Set in Western Sydney.

While rather lowbrow and very, very Australian, which can cause a lot of values dissonance with international audiences, Pizza is a satire of lower-class/working-class Australians, and is definitely worth a look. Here is the first episode, and a good spot from there to find different episodes.