"Covert agent and elite marksman Karl Fairburne must fight alongside the brave men and women of the Italian Resistance and defeat a terrifying new threat with the potential to halt the Allied fightback in Europe before it’s even begun."
—Official description on Rebellion's website 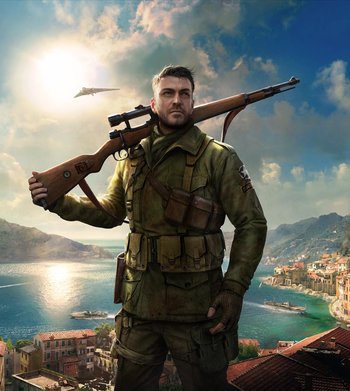 All it takes is a spark.
Advertisement:

The latest game in the Sniper Elite series and a sequel to Sniper Elite III. The game is set during the campaigns in Italy, chronologically still before the fall of the Nazis in Sniper Elite V2. SOE officer Lt. Karl Fairburne is sent in to Italy to address rumors of a new Nazi super weapon that could jeopardize the allied war effort. The game takes place across various villas, forested areas, and fishing villages in parts of Italy.

The game is a massive expansion of the base concept with maps at least 3 times bigger than the ones in Sniper Elite III, almost like an Wide Open Sandbox type of game. The game also introduces a number of new mechanics such as suppressed bullets, adjusting your sights for target distance, new kill cam sequences, and changed enemy AI behaviors.

The detailed kill cam is back and still incorporates the muscle and circulatory system layers, dynamic bone fractures, and a detailed vehicle kill cam add new levels of spectacle to the game. The game also added a kill cam for various melee kills showing Karl knifing, beat, and generally delivering lethal or debilitating blows to his enemies. There is also now a fragmentation cam which shows the effects of various explosions perforating your enemy with shrapnel and fragments.

There have been some AI changes to soldiers and vehicles both of which are now more aggressive in hunting the player if spotted. Enemies can call in reinforcements to flood an area with troops for nearby to find and/or flush out the player. They will more aggressive pursue the player further than in previous games and are more willing to lob grenades into hiding spots if they suddenly lose sight of you.

The vehicle weak spot mechanics have been changed to be more detailed with players able to shoot out the engine making it explode, knock out the radiator, or even flatten the tires on vehicles with tires. Boats are now in the game in some places and have their own unique weak spots to target.

The Experience Point system mechanic returns, with some changes. You must now complete certain challenges to upgrade certain parts of your weapons. The experience points can be earned in both single player and multi-player and carry over between the modes.

The game was followed by a comic book series in 2018, Sniper Elite Resistance.