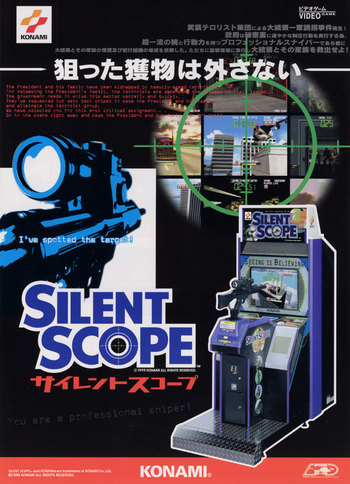 A series of games from Konami spanning 5 games (Silent Scope 1-3, Silent Scope EX (known as SOGEKI in Japan and Asia), and the most recent Silent Scope Bone-Eater), the first of which was released in 1999. The games' most prominent feature is the Sniper Rifle gun mounted to the cabinet rather than the typical pistol Light Gun that was used in games like Time Crisis or House of the Dead. The scope of the rifle contained an LCD screen to simulate the pinpoint precision of real scopes. Also known for being one of the few arcade gun games to actively encourage headshots: They are always an instant kill, even on bosses, and confer a hefty time bonus. Games like Time Crisis gave you the most points for headshots but the SS games actively pointed this out.
Advertisement:

The games were ported to the Sega Dreamcast, PlayStation 2, Xbox, and even the Game Boy Advance. The Xbox version was noted for its severely stripped-down rifle accessory.