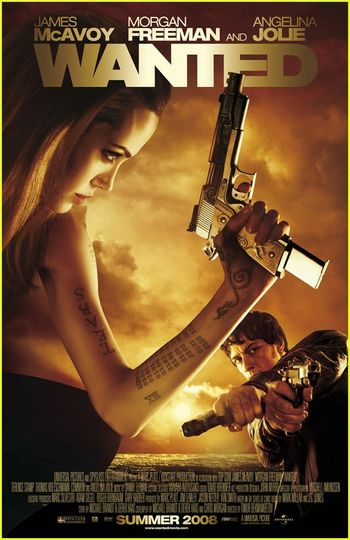 Curve the tropes.
"This is the role Angelina Jolie was born to play. She emerged from the womb already covered in tattoos and eyeliner for the express purpose of playing this character, who immediately entered my pantheon of Chicks I Want to Be Like When I Grow Up. Fox is the reason Angelina Jolie was put on this earth."
— Cleolinda Jones, Wanted in 15 Minutes

Meet Wesley Gibson. Wesley's father abandoned him when he was a week old, and things have gone steadily downhill since. He works for a disgusting boss at a job he hates before going home to a girlfriend who's sleeping with his best friend. But suddenly, Wesley is tapped to join The Fraternity, a league of elite international assassins. He is trained specifically to kill Cross (the rogue Fraternity member who killed his father), mostly by getting the shit kicked out of him by the rest of the team.

Wes learns many plot-relevant skills, including the pretty sweet ability to bend bullets. No, they don't really explain how, and no, they don't really need to. He uses these abilities to take down several nefarious do-badders, until it's finally time to confront Cross. Cue the giant showdown on a moving train... and on a crashing train... and on a falling train. But hey, at least Wesley finally gets his man — or does he?

Of course he doesn't. He just runs headlong into The Reveal, which sets up the real finale. A sequel for the movie is currently in Development Hell according to an official Q&A.

Very loosely based on, or at least named after, a comic-book miniseries by Mark Millar with very different characters, themes, and setting.

There is a game, Weapons of Fate, that draws plot elements from both the comic book and the film (most notably, Wesley in his original costume and the Russian assassin that serves as a Plot Point in the movie). The game starts shortly after the movie ends, and is notable both for being a sequel instead of a recreation, and for taking a year after the movie's release for development with the explicit goal of not falling into the "rushed product to match the movie's release date and hype" trap. Naturally, opinions vary on the success.

It has now a character sheet! It's in progress, however.

The Wanted movie and game provides examples of the following tropes: