"The only thing getting murdered are my anxieties, tensions and fears. Speaking figuratively of course. I'm against violence of any kind.
— Seth (Justin Theroux) 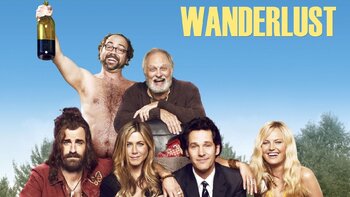 Leave your baggage behind.
Advertisement:

After George (Paul Rudd) is downsized from his financial firm and Linda's (Jennifer Aniston) depressing documentary is cancelled, they can no longer afford their overpriced 'micro-loft' in New York. They find themselves with just one option - to pack up their lives and head south to move in with George's brother and his wife. George and Linda stumble upon Elysium, an idyllic community where the only rule is to be yourself.

Wanderlust is a 2012 American comedy film directed by David Wain and written by Wain and Ken Marino, who also produced with Judd Apatow and Paul Rudd. The film stars Jennifer Aniston and Rudd as a married couple who try to escape modern society by finding themselves on a commune in Georgia, after the economy crashes down on their dreams in New York City.