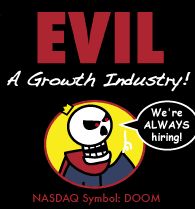 "He'll welcome you into his lair,
Like a nobleman welcomes his guest,
With free dental care and a stock plan that helps you invest!
Beware of his generous pensions,
Plus three weeks paid vacation each year,
And on Fridays the lunchroom serves hot dogs and burgers and beer!
He loves German beer!"
— Theme song

of Hank Scorpio, from The Simpsons
Advertisement:

Tired of your boring job? People not giving you the respect you deserve? Looking for some Bread and Circuses? Need some dental work but no coverage? Then consider a career in evil.

This is where the Big Bad, usually, helps someone either by moving them up the corporate ladder or by helping them improve their standard of living. The person so helped in return will either repay them in the form of a favor at a later date or just join the Big Bad and his/her crew.

Can be a Deal with the Devil. Contrast Evil Feels Good and Villainous Demotivator. See also Evil Pays Better. Is absolutely Truth in Television: though naming specific real-life examples would be bad, a lot of groups the general public considers to be villainous draw in members by appealing to their basic domestic needs and making their home lives better.