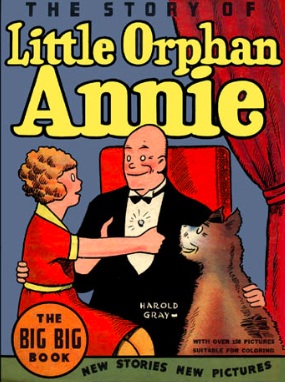 Little Orphan Annie is a comic strip created by Harold Gray in 1924. The original version ran through 1974 (with everything after Gray's death in 1968 done by other authors), then went into reruns for several years; Leonard Starr resurrected it in 1979 with the title simplified to Annie, following the success of the Broadway musical (see below).

In the strip, plucky redheaded orphan Annie is taken in by self-made millionaire Oliver "Daddy" Warbucks, the world's richest bald person. Most of the starting plots were Annie and Daddy dealing with thieves trying to steal the Warbucks millions. Either that, or people who'd try to kidnap Annie and hold her for ransom so they can get their hands on the Warbucks millions.

But since there's only so many ways of doing those kinds of plots, Annie would often be separated from her protector for months at a time, living on the streets again and bringing sunshine into the lives of struggling small-businessmen, honest laborers, and little old ladies with evil bank-managers.

The strip spun off two films: one in 1932 by RKO Pictures, starring Mitzi Green as Annie, and the other in 1938 by Paramount, starring Ann Gillis. Both flopped big time at the box office.

A radio show titled Little Orphan Annie also was spun off from the comic strip. From 1930 to 1943, children were able to join Annie's secret society and encouraged to drink their Ovaltine (even in their Secret Society Decoder Pins!). Shirley Bell did the voice of the popular orphan for most of the show's run, until Janice Gilbert took over the role in the last year or two of the radio shows run.

In 1972, Martin Charnin bought the rights to the comic strip. With Thomas Meehan and Charles Strouse, he created the Broadway musical Annie in 1977. The musical has itself been adapted as a 1982 film, a 1999 TV movie, and a 2014 film.

In 1995, Annie: A Royal Adventure!, a Made-for-TV Movie starring Ashley Johnson, aired on ABC. Also released in 1995 was a relatively little-known animated special entitled Little Orphan Annie's A Very Animated Christmas produced by Gaiam and distributed by Freemantle Media, which is by far the only animated adaptation apart from a 1990s Hanna-Barbera animated series

that never took off the drawing board for whatever reason.

The strip ended its 86-year run

in June 2010. However, Dick Tracy ended up solving this cliffhanger!

(When quoting the strip, we've changed the punctuation to conform with today's standards. In the original strip, there was no dot after the sentences. Instead, there was a hyphen between sentences. That doesn't look good on the web, so we're using standard punctuation here.)