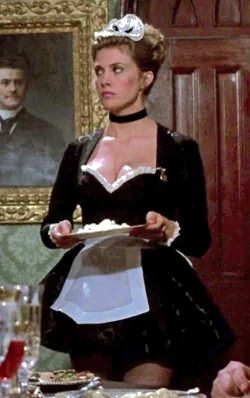 ) in the 19th century, the original costumes were almost never as fan servicy as those found in modern times. The attitude is also part of the package, inasmuch as she is essentially the soubrette

of the old French comedy: she will be extremely flirty, often with a feather duster. She also acts snippy, pert and cheeky to everyone who isn't her employer (and sometimes him) and superior to any of the other servants except the butler and maybe the cook. The French Maid will speak with an over-exaggerated French accent and use Gratuitous French.
Advertisement:

Contrast to Meido, which is a Japanese concept developed from this one. The key difference being that a Meido is intended to be Moe and subservient, while a French Maid is sexy and saucy. Contrast even further to the Scullery Maid, who is decidedly less sexy, but has much more power in the plot.

For the costume rather than the character, see French Maid Outfit.