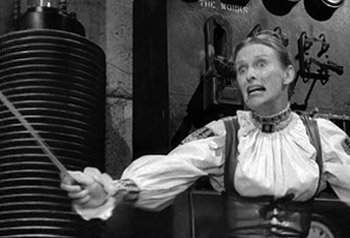 He... vas... my... BOYFRIEND!
"I am Frau Blucher. [horses whinny] Your rooms are ready, Herr Doktor. If you will follow me, please."
— Frau Blucher,note WHINNY! Young Frankenstein
Advertisement:

Ever found yourself at a huge mansion in the middle of a torrential rainstorm? Chances are the door was opened to you by a Creepy Housekeeper. This character spends much of her time walking around a large manor house cleaning, cooking, being fanatically devoted to her master, and scaring off any new female inhabitants of the house. Although she often welcomes hapless visitors, chances are they will be either murdered or scared off by the end of a terrifying night. She will be common in murder mysteries/tales of the supernatural, although often subverted for comedy.

Her male counterpart is the Crusty Caretaker. They'll often tag-team any newcomers into being properly creeped out before the hauntings start. Sometimes takes on double shifts as a Haunted House Historian to ratchet up the creepy. Contrast the sexier French Maid, as well as the more maternal and less unsettling Kindly Housekeeper.