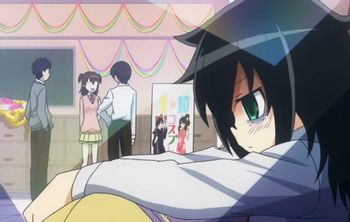 The Creepy Loner Girl is a loner and a weirdo. She will invariably have No Social Skills, which, combined with her gloomy personality, will give off a creepy aura. She frequently has trouble talking to people, either being too shy to speak or devolving into uncertain stuttering. Because of this, it's common for her to have no friends. Personality-wise, she's either deadpan or overly emotional, with a poor control on her moods.
Advertisement:

She will often have some sort of socially unsightly interest or hobby, such as the occult, horrific things, building a fantasy daydream universe in her head, Otaku culture, or something really obscure that few people even know about. If she's an Otaku, she may go the full stereotype route and be a Hikkikomori. She might very well also grow up to become a Crazy Cat Lady.

Besides these common personality traits and characteristics, the Creepy Loner Girl also has a rather specific appearance as well. She will dress in frumpy and often dark-colored clothing, and care little for her appearance. Her hair will be disheveled and usually long and dark in color as well, to contrast with her pale skin. Creepy Shadowed Undereyes are a must, as are Dull Eyes of Unhappiness. Overall, her appearance suggests sleep deprivation, which is often exactly the case. She will be frequently described as unattractive, although more often than not, she will still look cute to the audience. In fact, she may end up looking Creepy Cute.

This is an almost Always Female character trope mainly native to Japanese media. In internet circles, this archetype is sometimes known as "mojyo", which is Japanese for "unpopular girl".

Sub-Trope of Loners Are Freaks. Looks Like Cesare is the Spear Counterpart in terms of appearance, but not necessarily in personality. For characters whose shyness and social ineptitude makes them endearing instead of creepy, see Dandere. In a Four-Temperament Ensemble, she's the melancholic.