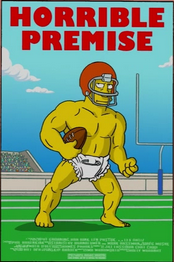 We don't know what stinks more: the concept or his diaper.
"I simply don't care a damn what happens in Nebraska, no matter who writes about it."
— A now-forgotten critic on the book O Pioneers!
Advertisement:

Some shows never stood a chance. Not necessarily because they're bad, but because the very concept scared people away. This is the Audience-Alienating Premise: An idea that could be cool and could even make a fantastic show, book, movie, video game or comic, and may very well have, but which instead dooms the work from the very start due to the mere concept being a difficult sell. Sadly, due to how it "sounds", many people won't try it out.

This can play out in the inherent struggles with trying to get people excited with niche genres (horror films with Squick, Nausea Fuel and Black Comedy), foreign material that doesn't translate well (comedies with puns based on the native language), genres that were killed off some time ago (blaxploitation can only exist today in parody), adaptations of an existing property with a built-in stigma (Peter Pan is for kids because of the Disney movie), trying to appeal to too many demographics at the same time (making only that part of the film intelligible to its target audience), characters who are difficult to root for (an Unsympathetic Comedy Protagonist who mooches off the generosity of friends), a brutal deconstruction (fans would be insulted by the criticism, while non-fans would still see it as the same style of work) or the execution itself takes things in an unexpected direction.

Note that this is not a judgement call on the work itself. Marketing itself can be entirely at fault, trying to sell it as something more generic when it has plenty of other qualities to offer. Sometimes attempts to mimic styles popular from other cultures comes off as too different for audiences to understand and appreciate, even though it is a fine example of that genre in its own right. Of course, a work with such an obstacle can rise above it and achieve recognition; in many cases an oddball work is shunned on release only to become a Cult Classic, often being either Vindicated by Video, Vindicated by History, or Vindicated by Cable. Simply having an off-sounding premise doesn't immediately qualify for this trope, as sometimes a movie inspired by 1930s pulp space adventures or psychedelic rock with horror themes ends up being wildly successful anyway. Compare that to It Will Never Catch On.

Compare Germans Love David Hasselhoff when a work winds up much more popular in another country due to differences in tastes and Values Resonance. When the alienated audience is in another country, it's Americans Hate Tingle. This is usually attributable to Values Dissonance. Public Medium Ignorance is for works which suffer from a strong tendency to be audience-alienating. More often than not, the resulting work is Overshadowed by Controversy.

Could also overlap with Necessary Weasel, Anthropic Principle, and Uncertain Audience. Contrast Dancing Bear, where the oddness of the premise attracts interest rather than discouraging it. Also, in many ways the opposite of Multiple Demographic Appeal; in fact, an Audience-Alienating Premise is sometimes the result of trying to cater to different kinds of audience and failing to attract any - even fans of multiple things don't always like those things in the same work at the same time. Compare Intentionally Awkward Title.

Note: Since "some people won't like this work's premise" on its own is too subjective even for YMMV, there should be objective proof that people in general didn't like the premise. This means the work being a Box Office Bomb, Acclaimed Flop, or Creator Killer, Short-Runner, Stillborn Franchise, or receiving No Export for You, which can only happen after the work has been released to the public, so do not add examples of unreleased works. Just because one person finds a work's premise unappealing doesn't necessarily mean that everyone shares that viewpoint, and just because a work's initial trailers are unappealing, it doesn't mean the work is doomed to failure. In short, this reaction should not be used for Complaining About Shows You Don't Like.