Music / Unfinished Music No. 2: Life with the Lions 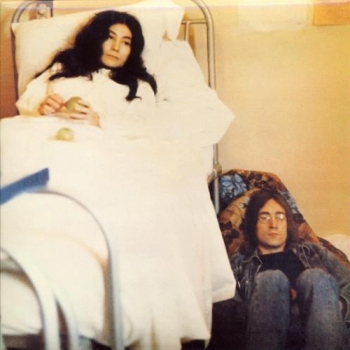 Unfinished Music No. 2: Life with the Lions is the second studio album and debut live album by John Lennon and Yoko Ono, released in 1969. Less famous than their first album, Unfinished Music No. 1: Two Virgins from 1968, it once again consists of Avant-garde Music.

The first side of the original LP is devoted to a registration of a concert of John and Yoko at Cambridge University, with Yoko singing to Lennon's guitar feedback; at the end saxophonist John Tchicai and percussionist John Stevens join innote Ono and Lennon's performance segued into Tchicai and Stevens' own solo performance, and the transition point is captured during the fadeout. The second side was recorded on a cassette tape in John and Yoko's suite at Queen Charlotte's Hospital in London and is mostly background noise, two minutes of silence and some improvisation.

No Bed For Beatle John (but there are a lot of tropes!):