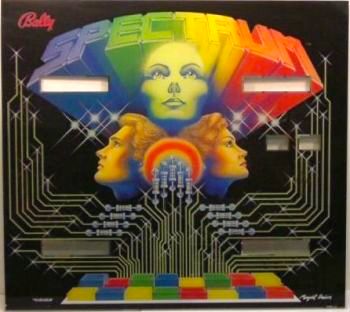 Spectrum is a Physical Pinball Table designed by Claude Fernandez with art by Margaret Hudson. Released by Bally in 1982, it's based on— of all things— the game Mastermind! Players have to deduce the 4-color code provided by the "Computor" by shooting the ball into the colored saucers (to obtain clues), comparing them to the light display on the playfield, and then shooting banks of colored targets to place the colors in the order of your guess.

This level of game complexity (compare the rules here

with the ones provided on the instruction card

◊) plus other uncommon features (no launcher — a new ball went into play as soon as the player pressed Start or a ball drained), made this machine a major flop: of the 994 machines produced, less than 500 were sold and the others allegedly scrapped or salvaged. A notable oddity.

Not to be confused with its contemporary, the ZX Spectrum.