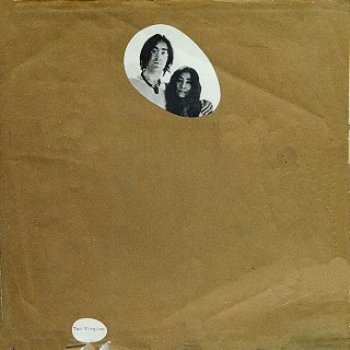 Who was that?
Advertisement:

Unfinished Music No. 1: Two Virgins is the debut studio album by John Lennon and Yoko Ono, released in 1968. At the time he was the first Beatle after George Harrison to release a non-soundtrack solo album note Paul McCartney released his score for the British film The Family Way in 1967, which happened only a week after the release of Harrison's Wonderwall Music.

Two Virgins caused enormous controversy for depicting John and Yoko in full frontal nudity. The scandal has overshadowed the actual content of the album, which is basically a recording of John and Yoko experimenting with all kinds of sounds and noises, while Yoko feels the urge to wail a lot from time to time. It only sold well because of the scandal and because it was Lennon's first solo record, but is generally only interesting for Avant-Garde Music fans and/or Lennon biographers. It is safe to say that its album cover is more famous than the content.