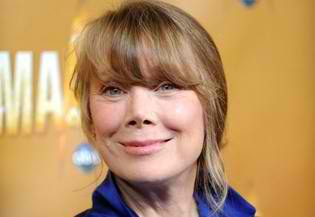 "When I started out in independent films in the early '70s, we did everything for the love of art. It wasn't about money and stardom. That was what we were reacting against. You'd die before you'd be bought."
Advertisement:

Mary Elizabeth Spacek (born December 25, 1949 in Quitman, Texas), known professionally as Sissy Spacek, is an American actor, best known for her roles as the titular Carrie and Loretta Lynn in Coal Miner's Daughter. She is married to production designer and art director Jack Fisk since 1974 and they have two daughters, Schuyler Fisk (born in 1982) and Madison Fisk (born in 1988).